What are little boys made of?
Frogs and snails and puppy-dog tails
That’s what little boys are made of 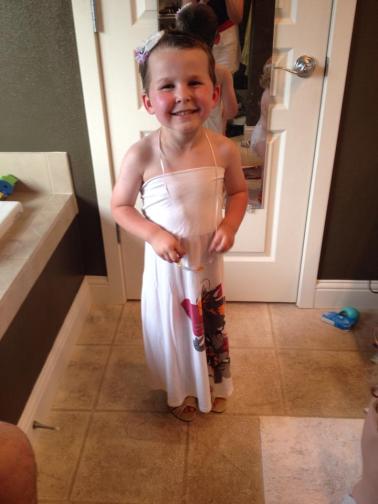 My son, all gussied up.

When I had my first baby, my aunt gave me a bag of dress-up clothing for my son to play with when he was older. She said in her experience, her boys had appreciated having pretty dress-up clothing that they could play with. At the time, my baby was only a month old, so I had no idea what it would be like when my son grew up. But over the past five years, I have heard that conversation over and over as I interact with my son and see him want many things that most people consider “girly.”

I have spent countless hours doing my son’s nails, helping him into high-heeled shoes, putting barrettes or other hair accessories in his hair, modifying my clothing so it fits him, showing him my make-up, and putting jewelry on him. Some of these things he wanted when he was young and was simply interested in what I was doing. Other things he wanted when his little sister asked for it. And sometimes, I think he asked for them because it’s nice to have someone pay attention to you. Children simply don’t care that society makes certain things for girls and certain things for boys.

And beyond all of those “girly” things, I can see that my little boy needs a lot of physical affection. It’s easy to cuddle with a quiet little girl who sits in your lap on her own and gives you a hug. My son runs everywhere and hardly stops for anything, yet he needs as much physical affection as his little sister. When he was two years old, he switched to a new teacher at daycare, and he would come home and ask me to hug him. All he wanted was to sit with my arms around him and it broke my heart. I could clearly see that he wasn’t getting enough physical affection during the day. Even now I have to grab him as he runs by to give him a hug. Or take the time to rub his back if he happens to be sitting still. Or simply sit with him on my lap when I get the chance. And almost every time he smiles at me and says something like “Can I sit on your lap again? Will you keep rubbing my back?”

So while I firmly believe that we should let our high-spirited boys be boys, I also think we shouldn’t assume that their high energy means they don’t need as much affection from the people around them. My approach is to let my son play with whatever he wants, and try to always remember that he needs affection, but won’t ask for it.

I think little boys are made of sugar and spice just as much as little girls. Perhaps they just hide it under their frogs and snails.